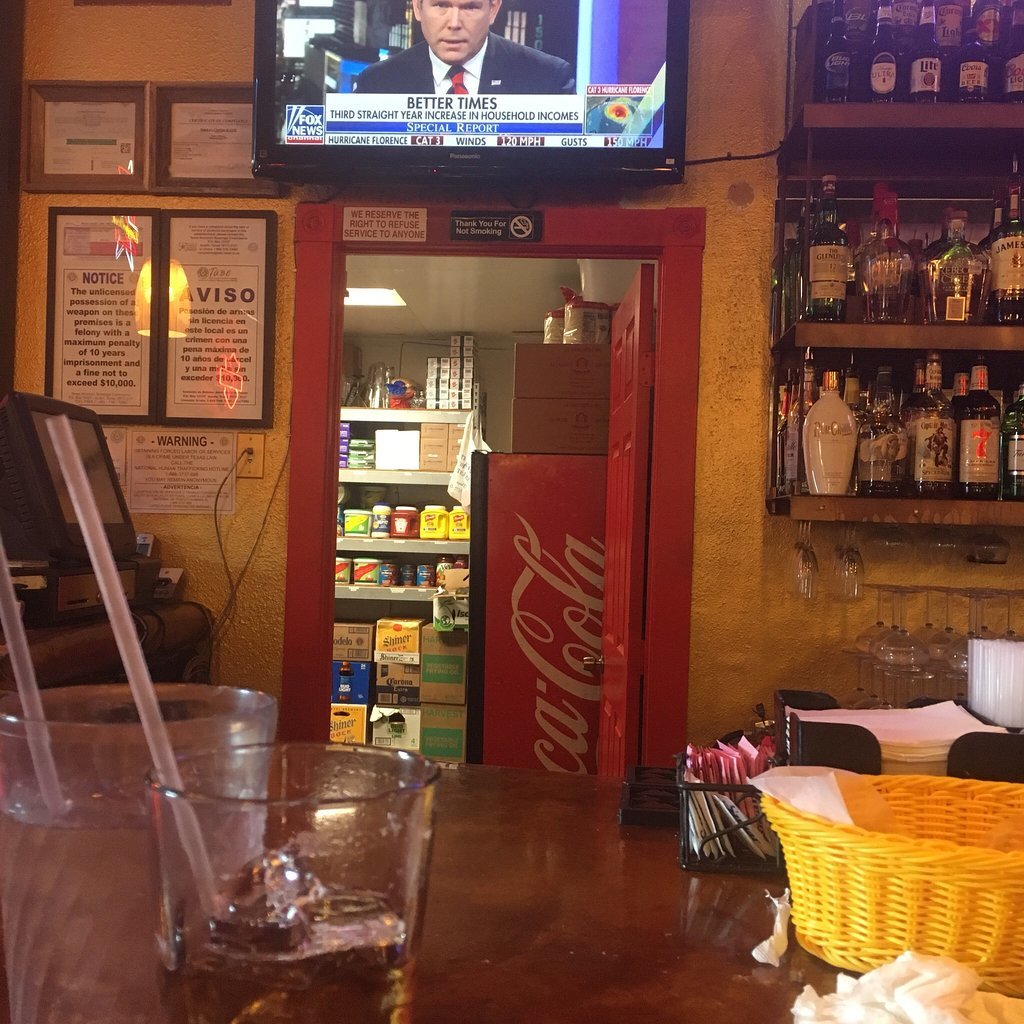 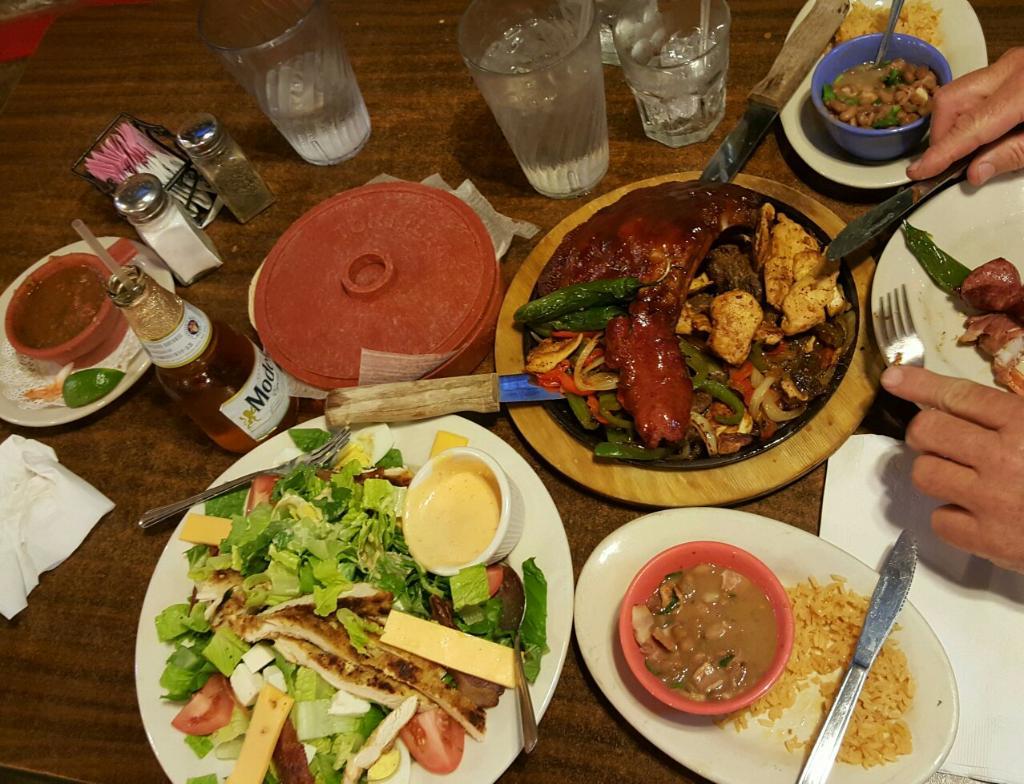 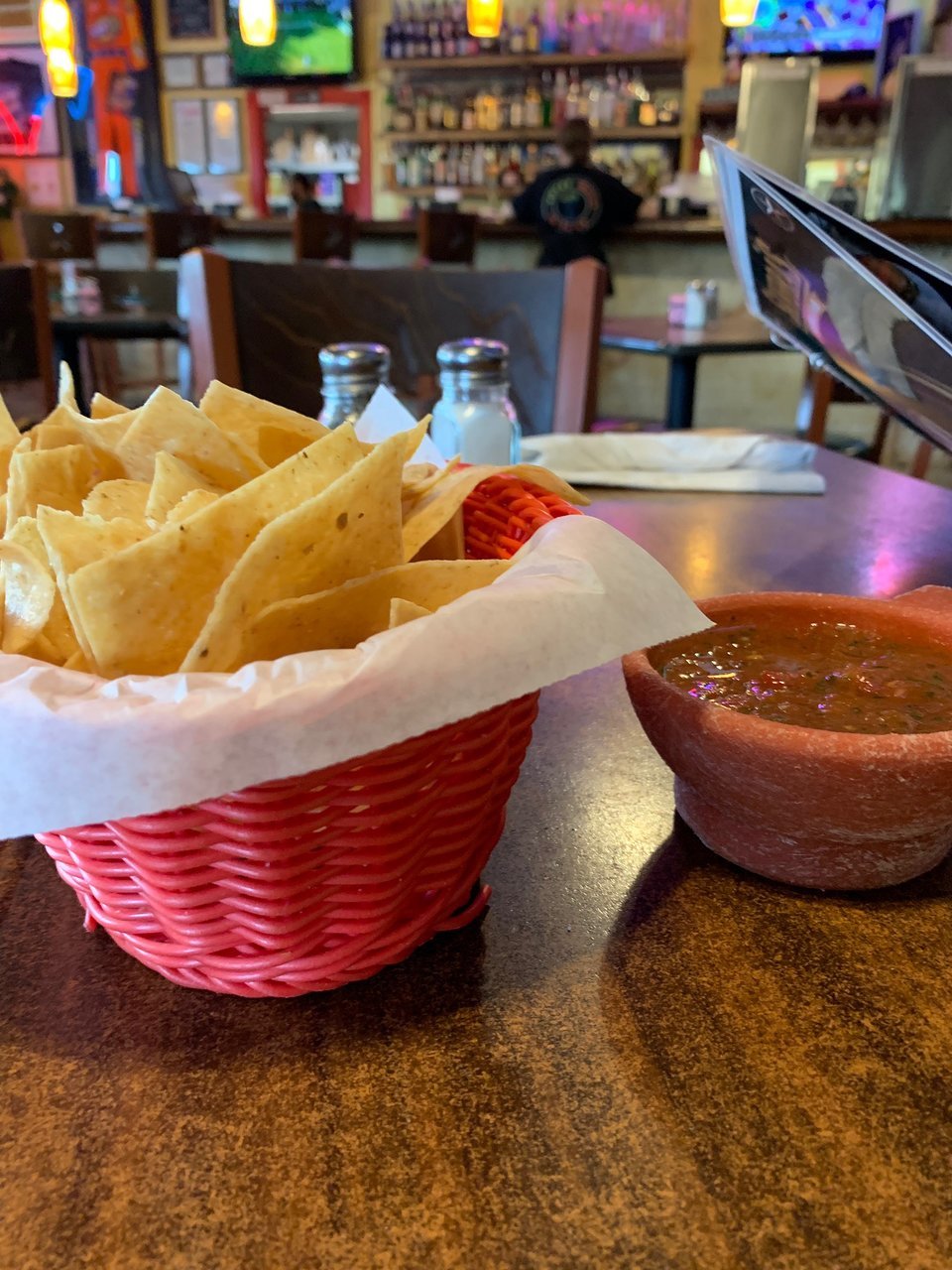 Are the staff always in a bad mood!? RUDE!!

Do you all serve menudo on Fridays?

I think it is only on Saturday and Sunday.

Trash just because they don't speak Spanish? No sir, they are not rubbish, do not be rude, there is no need. Spread kindness! 🌷

Green enchiladas are to die for. Salsa is great too. Havent tried much else but everything I have tried is great. The little lady in the kitchen is the only one that cooks so it is always the same great taste. Must try if you are passing by.

I give this place a 5 star rating for a few reasons. The first is a reason that a lot of people are finding negative, the food takes awhile to arrive. The service isn't slow it's fresh cooked food they even have a sign up that says "we don't serve fast food we serve fresh food as fast as we can" it's worth the wait to me. The servers have always been so friendly each time we go. And the best part is the playground so my son can play and we can eat and have a happy hour drink.

We ordered curbside and we were just super disappointed with the food quality. The rice and beans were so salty you couldn’t eat them- and I love salt. The Margaritas— another big disappointment. I’ve heard from people around here that this place is great. We are from San Antonio and Mexican food is our favorite. Sandra’s is waaay over priced and we will never waste our money there. Limestone in Bulverde is very reasonable and delicious! With great Margaritas.

Now I’m not sure if it was what we ordered, or if it was because it was really busy...but what we got was not appetizing at all. I called to put in a order for pick up. The girl that answered the phone was super nice. Told me ahead of time that the food would take 45 minutes to a hour, but that she’d call me if it was done sooner. 45 minutes later, I get a call saying the food was ready. We live less than 5 minutes away. Get there, no parking...but no biggie, the place was packed. $52 later we have our meal for 4 & we’re on our way home. $52, that didn’t even include drinks. 5 minutes later, we get home. $52 worth of cold food. Not only was it cold, it was just not good. The chips & salsa were the only saving grace. Maybe if ate there it would’ve been better.

I have tried to be patient with this place. But, my patience has run out. I have had several meal that were mostly uneatable. Problem is, way to salty. Now, I am not a picky eater and I salt almost every think I eat at home. But, this place is to the extreme, mostly with dishes served with there Ranchero sauce. I don't think I will be returning. Dishes that aren't over salted aren't that good either.

The food was very good; had the Sandra burger. The service was exceptionally good. We will definitely be back as the food and drink were also reasonably priced.

The Ambiance is great and the food is even better. The service was very fast and friendly courteous and knowledgeable. The waitress was fantastic and very very helpful and courteous. The food was delicious and eye pleasing. My daughter and I had a great brunch there. Would recommend this restaurant to anybody and everybody it was fantastic stop in and find out for yourself you will not regret it.

Food is awesome. Sometimes takes a little long, but they have killer margaritas to help pass the time.

This was the second we went there and waited more than 30 minutes for our food because they were working on a big order to go; so I guess they wanted to make guests wait outside in hot weather. Food was super salty and not worth waiting for....

I have never not had an upset stomach for 3 days after eating here. Last time, and this time I mean it.🤮🤮🤮

Super friendly people. Amazing food and Margaritas...great suggestions on what to order

Great place to start your day with some Tacos 🌮

Sat at the bar. Food came quicker than I was told. All food is made to order. This is a chicken fajita burrito topped with chili and cheese. Very tasty!

This was our second trip to Sandra's. Both meals were very good and the staff is outstanding. I think we are about to become regulars.

Walked into this place of business on a Friday evening at 8:15, 45 minutes before closing at 9pm. All outdoor lights were off and there was one open table for four ready to seat. We were greeted by wait staff telling us orders would take 1.5 hours to complete (yet they close at 9pm). This was only after she conferred with the owner/manager first. So with that said, I can gather this place of business did not care to have anymore business that evening. You don’t turn off all outdoor lights then have your wait staff lie to customers because you don’t want anymore business for the night. Up until that night, myself and family were regular customers there. Actions such as these are BAD FOR BUSINESS GUYS... Real bad. I won’t be stepping foot in that restaurant anytime soon.

Food was great. Margaritas were amazing. Service was not good.. But the Food Did make it better

Brittany is simply charming, professional, industrious and wonderful overall. In fact, the staff at Sandra's is always fantastic and friendly. The atmosphere is disarming, comfortable, and conducive to kicking back and relaxing -- Hill Country style!

The food is very flavorful. Prices are pretty standard. I had a very bad experience with service from the manager in the past but came back because the food is good and there are only so many places to go around here. This time the service was excellent. The outdoor seating is nice and there is a reasonable play area for children. We went without the kids this time but being that we have four kids we notice these types of things

Had to leave the restaurant without our meal. Too long of a wait for what we ordered. This was on a Saturday at 11:30 and the place had just a few tables occupied. This was our first visit and were quite disappointed. First, It took a while before someone came to take our drinks and lunch order, there were several waitresses that were just standing, not sure why they didn’t come to our table right away. 45 minutes after we placed our order and there was still no sign of our food coming. Was asked the waitresses and she said that it was still been worked on. We asked for our check and left. We were not charged. Can’t really use the excuse of “cooking fresh food” as I have been to many other places with far more complex and exotic dishes freshly made that don’t take this long to prepare. I think they need to take an honest look at how they process orders and prepare the food to determine how they can improve their order-to-table time.

A friend had me meet him there for a breakfast. The atmosphere was fun the people friendly, and the service is as fast as the cook.Glad I got to try it.

Entered just minutes from closing time. Fajita tacos were really good but I was the only customer in the place.

Margaritas were great the food was great...i will be back

The food is good, there is better in San Antonio's Southside.The last time we were there the waiter informed us there would be up to an hour wait for food.No problem, we went a mile down the road and had an excellent meal.

Good place to come and get a strong flavorful margarita.

Delicious food and courteous and staff. This restaurant has a great atmosphere and good drinks. We were very satisfied with the whole experience.

Great host, polite clean waitress and amazing food with authentic tastes. I might say this is the first place I've been where the food looks like it's pictures do... We'll definitely return but not soon enough. Did we mention there's a playground for kiddos?

Your question has been sent.

Your review has been submitted.

Want to order over the phone?

Thank you for being with us!

We will call you back!